Today is so hot you can smell thyme, sage, and pine needles in the air. Car tires exude fumes of rubber. Wine in a glass is too warm in ten minutes. Even the fish in the rocky pools float around languorously.

We hopped off the boat at a lush palm beach. A stream ran through the beach sand, down into the ocean. The water was cold and fish darted around dodging our bare feet as we crossed. We followed the stream up into a leafy forest where it widened into a little river. The water was green, as if the bottom was covered in emerald sand.

Clambering upward along the path we passed a few quiet pools where fish swam in circles. Our voices echoed off the walls. And then we hit a cliff and had to turn back. I switched into water shoes and we waded into the river, continuing our way through the water.

Finally we reached the soft boulders, moulded pillow-like by tons and tons of water rushing down the gorge from the peaks above. Cold mountain water gushed down the rock pile, cascading in white foamy little waterfalls. The only way up was bouldering. In bikinis. Some of us were over 60 years old. All of us were ashtanga yogis so agility and strength was no issue.

We climbed the rocks and swam across the pools like children. I tore my bikini bottoms on the rocks while sliding down a cascade of water and stone. Some of us disappeared up the gorge for well over half an hour, while others floated down among the little fish in the cold clear water. In the middle of the boulders and cascades we met a group of gray-haired German backpackers who had hiked down following the river, all the way from the spring up above. They were swimming with shoes and backpacks, tumbling down into the water from the boulders, cackling with laughter, and not fearing hurting themselves.

And I could not help but wonder who sets the behavioral codes for those of us middle-aged and older? Who said proper grownups should not climb or be daredevils? Who said you must believe that you will hurt yourself if you climb a pile of slippery rocks when you are over sixty? And why is it that only a few of us care so little about societal limits that they stay strong and curious instead? 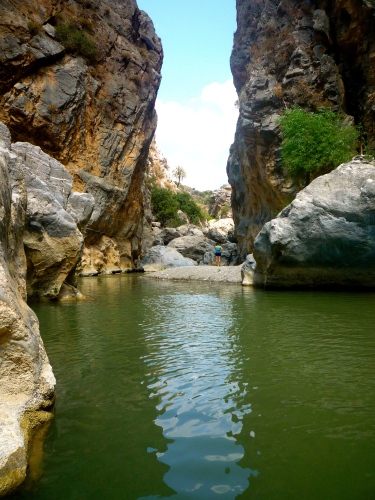 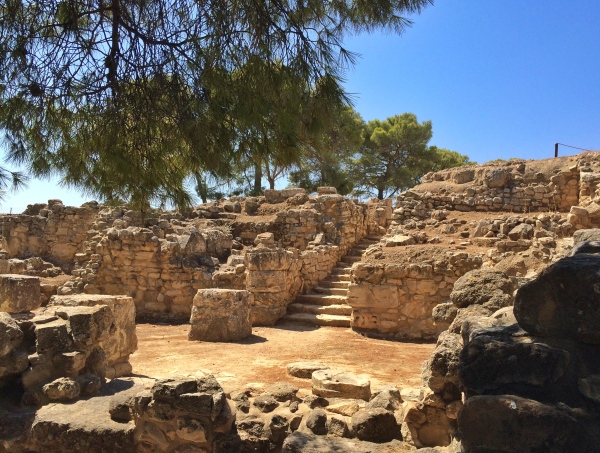 Once upon a time a powerful kind of people reigned on Crete. Nobody knows exactly where they came from. Nobody knows what they called themselves, but we call them Minoan based upon one of the legendary kings. We know how they wrote but we cannot decipher what they wrote, nor how they spoke.

With their plumbing, construction knowledge, rituals, and art they were perhaps even more sophisticated than the ancient Greek. They traded, fought wars, and sailed the seas. Like so many ancient civilizations they worshiped a mother goddess, before the world gave way to male main deities. They loved bullfighting thousands of years before the Spaniards.

And then the Santorini volcano blew up into a cloud of fire and ash, shook the grounds and seas, and threw never-ending walls of water against the coast of Crete. Villages were wiped away in by the tsunamis and ports and ships were shattered against the mountains. Badly crippled, the Minoan empire could not keep the Mycenaean invaders away. And when everything was almost lost, the Dorians arrived and wiped out the remains. And so what once was self-evident became fable. A thousand years later, Homer and Plato were reciting stories old as legends.

Standing over the ruins of the once story-spun palace of Festos, I cannot help but think how things would be today should Minoan smarts have survived. How would the world have turned out if they had not taken the secret of plumbing and flushing toilets to the grave 3500 years ago?

The answer is lost in the cacophony of afternoon cicadas and drifts away in the scent of dry pine needles and hot earth. 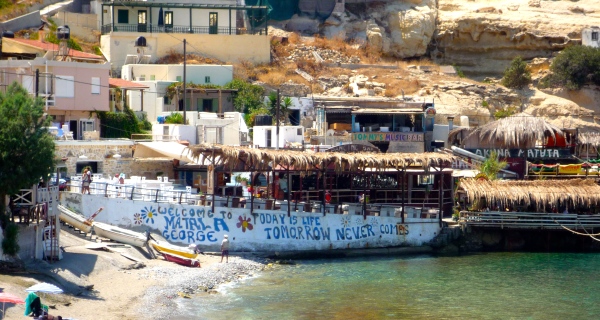 “Welcome to Matala George. Today is life. Tomorrow never comes” with daisies on a dazzling white wall. Lazy afternoons grooving underneath a thatched roof. Tripping by the flipped A in  “Hakuna matata”. Happy people dancing, toes twirling in the beach sand, under the Matala moon. Soul searchers like Joni Mitchell, Cat Stevens, Janis Joplin, and maybe also George, the Beatles George. The tired ones retreat to their caves in the rock and sleep on beds once carved out for the Roman dead. At each creeping dawn, tomorrow peered at the Flower Children over the rock ledge and decided to go elsewhere instead, if just for a day.

One day tomorrow came, along with those who thought the ancient tombs were better held sacred when prawled by tourists in swimsuits. Curious people came in throngs, too, to feel just a tickle of the magic without ever daring to throw themselves into living for the day. Matala became a site of pilgrimage, where the last remaining hippies were photographed as they ambled about their homes.

I stayed just for day, too. Maybe, just maybe, after I and the hundreds of tourists had gone, somebody lit a fire on the beach. Maybe a few dark shadows with smiles gathered around the flames. A guitar, a drum, and a few breaths while staring at the blackened water. Then music swirling up towards the milky way, voices, joy, and chasing today beyond midnight.

Who knows, perhaps some are still searching their souls under the Matala moon. 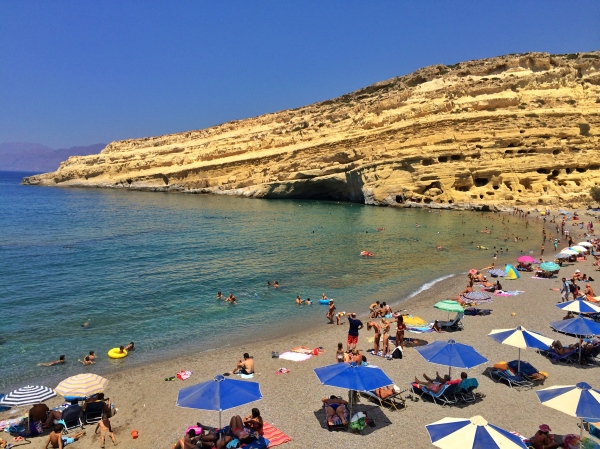 Once upon a time a giant dragon circled the mountain tops of Crete. It had come a long way and was exhausted to the core. But the valleys were crowded with noisy goats and crown of thorns, and the slopes were hot and uncomfortable. The dragon was sleepy, so sleepy, when it finally spotted a nice shallow sandy beach, like a warm bath. It landed, folded its wings, lay down its huge head, and fell into a deep sleep.

Today the dragon is still sleeping at the Agios Pavlos bay, head in the water, nostrils flared, and dorsal sail pointing towards the sky. If you are really quiet and on tiptoe, you can walk across its neck and enter its huge jaws. The daring ones are rewarded with a surprise: the dragon’s mouth is a vivid hue of purple.

Peering through the open jaws the view is magnificent: open ocean all the way to Libya somewhere in the far distance. The endless clucking of the waves makes even the curious guests drowsy. Stay too long and you will join the sleeping dragon in endless dreaming.

When the sun is up and breakfast has settled, it is time for a date with the fish. The crystal water looks shallow when viewed from a rock; dive in and suddenly a world of blue depth opens. The shallowness is just an illusion of perfect clarity.

Among the rocky reef, green-and-blue-marbled ornate wrasses bustle like costumed dancers going to a samba carnival, while scorpion fishes stealthily hang onto the undersides of rock, blending into the shadows. Diving into a submerged cave, tarantula-like Sally Lightfoot crabs scuttle away between the boulders on long, yellow-striped legs. And in the sandy beach bottom, a flounder is completing the camouflage-transition to invisibility.

Floating among the shoals of little deep blue fish I cannot quite decide which kind of life would be better: the zestful, endless ocean exploration of sardines or the quiet, world-observing meditation of the starfish. In the end, which is preferred? To truly be content with simple and less; or to spend one’s life exploring and chasing dreams? 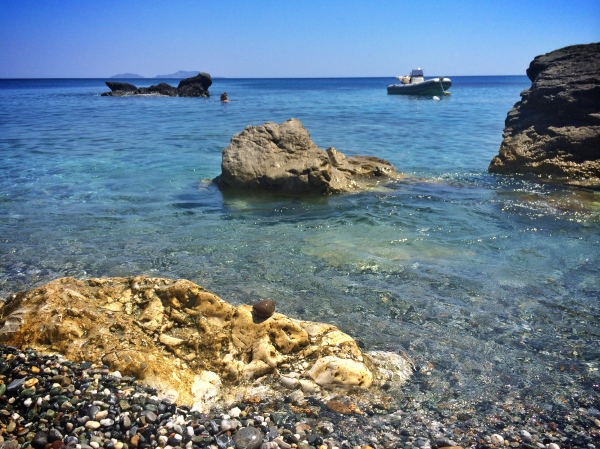 Dawn is the only hour of the day when the cicadas are quiet. It is also the hour when long, deep ujjayi-breaths slip out through the screen door of the yoga shala, mixing with wisps of incense. Inside, a room full of sweaty yogis move in meditation on the dark gray marble floor, each at his or her own pace. The air is electrified with immense concentration and infused with tranquility, a paradox that strikes me every morning as I enter the room.

Working through my poses I quietly ponder upon another paradox: there is nothing new under the sun and yet everything is always changing. Nothing is permanent and yet the patterns that form by change are always the same. We learn new things by making the same mistakes countless people have made before us. An ashtanga yoga sequence is identical from today to the next and yet it feels different every time I practice it.

Change is a sneaky little thing: we never catch it in action and only notice the effect. And so what is more valuable: development itself, or what happens to us when we become aware of how we have changed? 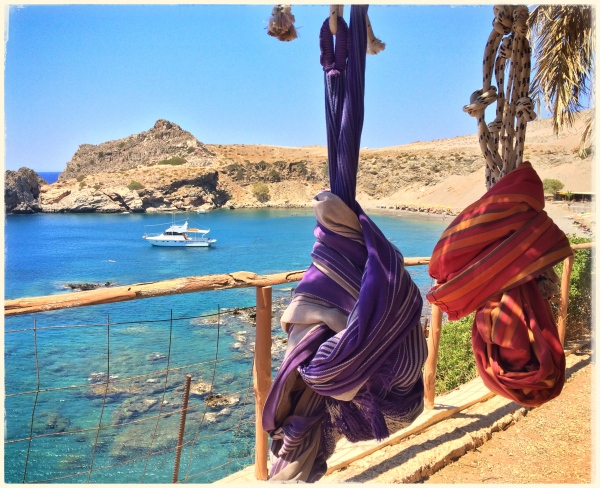 Starry warm August nights are best enjoyed outside reading a good book in the light of a storm lamp.

(Stories from Crete coming up…) 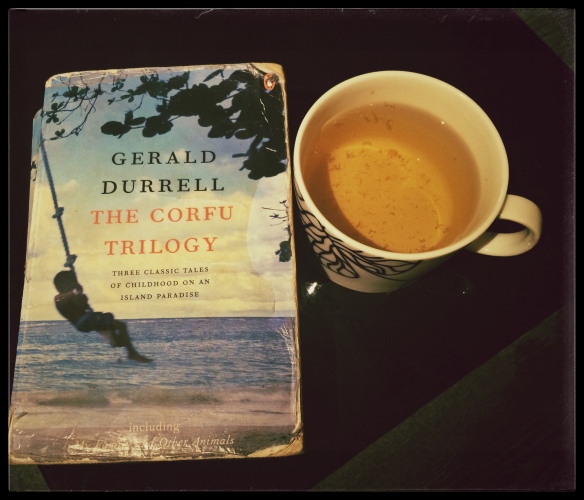 Two weeks of ashtanga yoga bliss on Crete was the perfect way to touch base. Now enjoying one more day of stillness, with Cretan mountain herbal tea and Gerald Durrell’s memories of summer days exploring nature on Corfu. This battered, faded, and apparently much-loved copy followed me home from the marine research base in Kenya last September (replaced with a book of my own). I had no idea then that I would be going to Greece in a year. This year a book on Istanbul followed me home from Greece so who knows what 2015 will bring.

But never-mind the present and future – I so wish I had been with Durrell and his eccentric family on sun-drenched Corfu in the 1930s.

“Each day had a tranquility a timelessness about it so that you wished it would never end. But then the dark skin of the night would peel off and there would be a fresh day waiting for us glossy and colorful as a child’s transfer and with the same tinge of unreality.”

Starlit mornings devoted to ashtanga yoga. Afternoons spent listening to the rumbling ocean and reading summer books. Evenings passed enjoying Greek cuisine, the company of lovely yogis from around the world, and moments of afterthought.

I am taking a timeout on Crete. Sarveśām shāntir bhavatu. May there be peace in all.