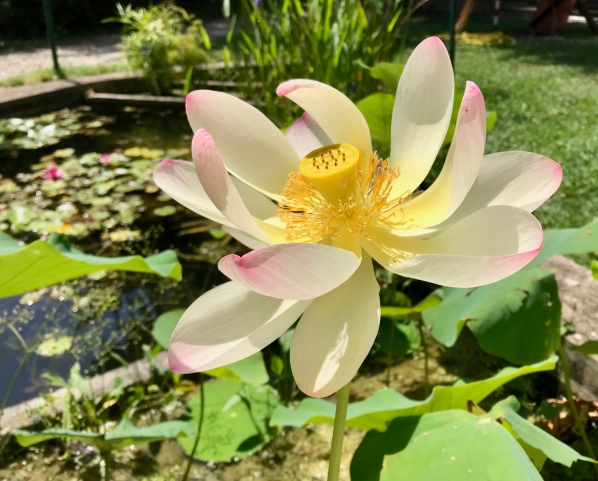 To the buddhists, the lotus is a symbol of purity and transcendence: its feet bathe in the muddy bottom of the pond while its flowers and often leaves, too, rise into the pure air above it all. It is a reminder that one can have one’s roots entangled in mud and mess while still keeping a clear and pure mind above it all.

As I walked around the botanical gardens of Bologna I thought of how my own feet were currently so deeply embedded in the mud and mess and madness of this world. And how it seemed that the level of mud was rising dangerously close to my head. With honesty to myself I admitted that my head was probably already covered in spatters of mud, messing with my mind.

It is easy to see one is messed up. It is much more difficult to pinpoint how, and what to do about it. I almost wrote “and how to get out”, but really, getting out never helps. It is all about getting in, and working it out from the inside.

This year I have been following a personal development plan which revolves around identifying negative energy inside and around me. One of its action points is to repeat to myself when needed, “I am not my emotions”. I have found myself repeating this mantra over and over again these past few months. Another action point is to KonMari incoming energies, impressions, and matters: sort them at the door and not letting every single one in. And if needed, put the newcomers in separate rooms, close the doors, and deal with them later. I have found that my mental rooms are nearing overcrowded.

Robin Sharma says that because a lifetime is precious and finite, there is no time for negative emotions. At all. That thinking a negative thought is to waste the time it takes to think that thought. This may sound like a highly platonically theoretic view, but when I think of all the time I spent dealing with negative emotions the past year I could probably amass a few weeks of life better spent doing other things. For example fully enjoying the botanical gardens of Bologna.

A dear friend once criticized me for being too solution-oriented. For offering my help in solving a problem when she would rather just wallow and swim in it for some time, until perhaps a solution slowly emerged. She gently told me that not all people want help, because not all things can be helped. Her words hurt me so much that I could not bear to spend time with her for two years. Some years ago I learned that not all problems can be solved. Not immediately, and perhaps not ever. Accepting the company of a deep injury for the rest of my life was possibly the toughest lesson I have learned in life so far.

And so I continue to trudge on through this life with my feet in the mud. As long as I remember to stretch upwards into the clean air, keeping my head relatively pure and sane like the lotus, I will be alright. 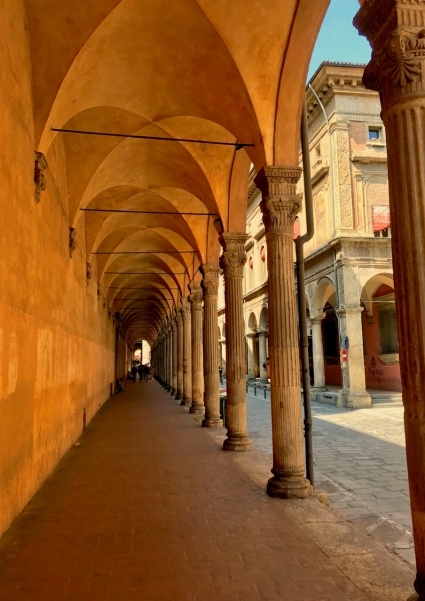 This watermelon has nearly no seeds, a very thin rind, and barely any green flesh at the edges. Seedless watermelons exist – and who knows when one might run into an almost rindless watermelon in the grocery store?

One does not need genetic manipulation to significantly alter life: a few centuries of focused work does just as well. The watermelons in Giovanni Stanchi’s 17th century fruit stilleben look more like the oversized berry that a watermelon botanically is: a green fruit with swirls of red flesh covering clusters of seeds. My watermelon on the kitchen counter looks quite alien in comparison, almost industrially produced, don’t you think? 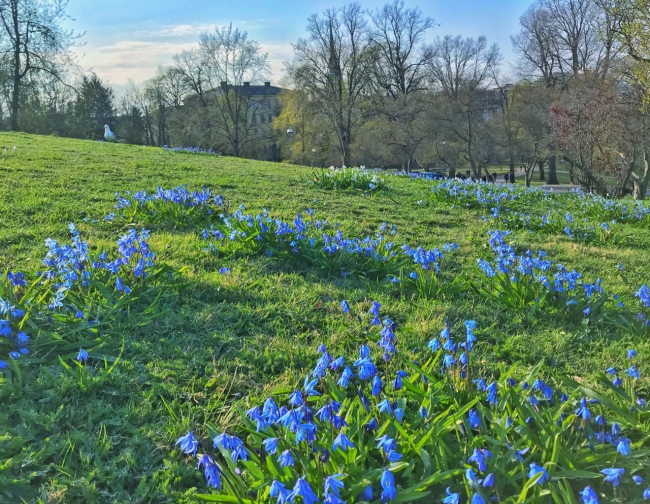 Spring in Helsinki means carpets of blue scilla. Someone must have started importing these plants from the Middle East and Caucasus, and now they claim their own space in every garden and park.

There is no better place to sit down for a glass of sparkling wine than in the middle of spring flowers.

Blueberries and bilberries are the same, right? Wrong. Blueberries found in our European supermarkets all-year round are cultivated highbush blueberries, juicy and light or green inside. The blue berries found in the Northern European forests are bilberries. These are the ones that stain your fingers and tongue when you eat them straight from the bush.

And it is the European bilberry which (as far as I know) is the superior superfood of the two: loads of antioxidants, minerals, and great taste, unbeatable by the North American blueberry.

But when it is April and the Finnish forests are only waking up one takes what one finds (in the supermarket). And so today granma’s old sugar bowl is filled with cultivated blueberries. 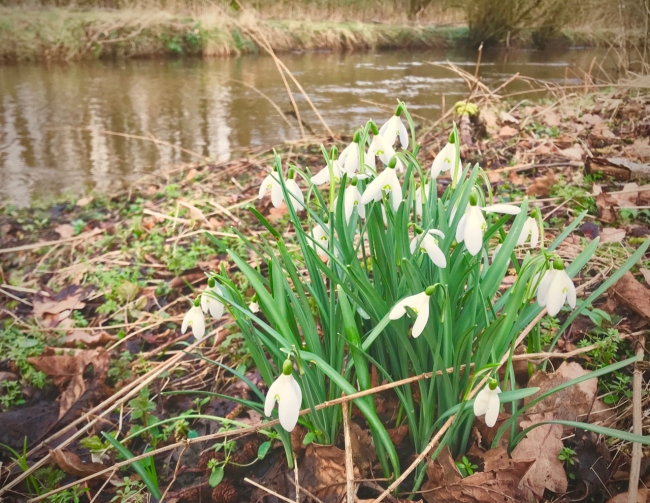 Snowdrops are champions of spring. Although in most of Europe they flower in winter, before spring equinox. Apparently they are not supposed to be native of Denmark but that has not stopped them from taking over this little town.

Snowdrops are literally sweet: they are filled with sugar which acts like an antifreeze against cold snowy mornings. Should one taste a snowdrop? No, as it is a narcissus – and those are poisonous at least to us humans. 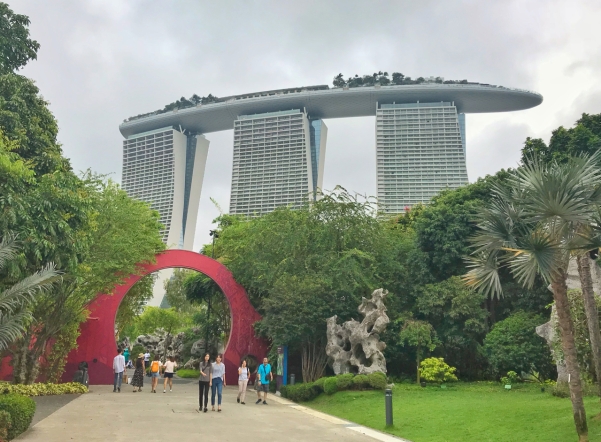 European cities may have a few large, designated parks and many small green patches squeezed in later between the houses and streets. In Singapore, urban greeneries and jungles are not inserted here and there after the city is planned and built. Instead, since 1967, they have been consciously included in the plan as the city grew. Surprisingly large areas of green have been retained, such as the Botanic Garden and the Gardens by the Bay. Access is free from dawn until late, in some cases until midnight. My local friend spends most of his weekends in the Botanic Gardens with his wife and baby, discovering new things every time.

Because this is Singapore, “conventional” is not a word used in the urban planning office. The Gardens by the Bay include huge mushroom-like structures of steel towering above the treetops, connected with canopy walkways. There are many theme gardens with colorful sculptures, and two huge, air-conditioned glass domes: the Flower Dome and the Cloud Forest.

The city is littered (or “decorated” if you prefer) with tiny parks, and each park is a carefully constructed piece of art, with surprising sculptures or a decorated walking path. Such attention to detail and imagination only happens when two aspects are met: enough affluence to invest a little extra in every structure being built; and a strategy to consciously incorporate greenness into city planning.

Only this way are there people employed to really rethink the greenness of spaces planned, before they are built. 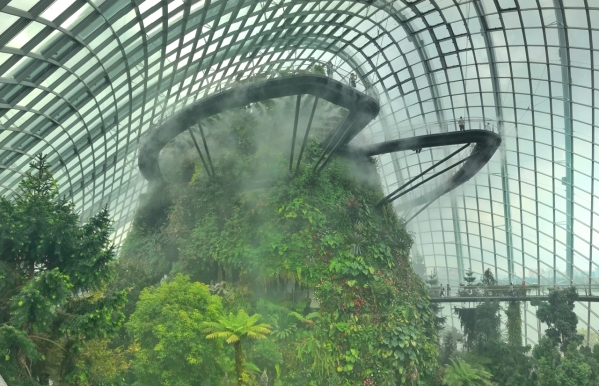 If it is too hot to enjoy gardens outside, why not build a hollow mountain with a cool cloud forest on the outside, complete with mist, underneath a huge glass dome?

The Cloud Forest consists of a large, hollow, man-made “rock” planted with flowers, ferns, mosses, and climbers. The entire construction is misted every two hours, and this is the main attraction: visitors time their visit to enjoy the cooling sensation of mist on their skin while strolling the 6 stories of criss-crossing walkways in the skies. Because this is Singapore, one can naturally ride the elevator all the way up.

But the best surprise awaits the one who makes it all the way down and still has eyes for more beauty: the waterfall cascades down into a clear pool lined with the most interesting ferns, mosses, epiphytes, and climbers. Oh if only I had a private garden in a cool, shady area – this and a few trees would be the gorgeous landscape. Who cares if there was no sun, as long as there are ferns, mosses, and no mosquitoes?