Stepping into Pierre’s is like visiting a whimsy old granma. Each table has different height, different chairs, and a different lamp. Some tables are draped with carpets. Others are decorated with roses.

But in the end, who even remembers the decor when there is chocolate on the menu? Gorgeous hand-made truffles, rocky road, and broken chips decorated with cranberries. Cakes that weigh a ton and infuse with a will to live, if only for another piece of the same.

For me it is the hot chocolate that gives me hope that there is goodness in this world. For me it is that big steaming cup with gooey chocolate, stirred with a pinch of sea salt, some caramel, a spoonful of honey, and whipped cream on top. All I need on a cold, bleary Friday morning after an intense day and night of work the day before. Give me chocolate and I can dare to hope it is all going to be okay.

What do you do when there is no way to climb right up without hitting the mountains? Climb like the birds do: circle around like an eagle in an updraft.

What if your little daughter or sister was proclaimed to be a manifestation of a goddess at the age of five? What if she was carried away to a temple and locked up except for ceremonial processions? What if she was never allowed to smile in public and her feet were never to touch the ground outside? What if priests worshiped her every day and tourists gaped in awe or reverence when she appeared at the window?

And what if she, by showing the first signs of puberty, was to suddenly become a mere mortal again? If she had to go through a crash course of finding an identity other than deity, learning how to read and write, and how nobody can be commanded outside of the temple?

To be a Kumari is to be whisked beyond reality, just to crash into mortality a decade later. Today Kumaris are expected to find a place in society – yet only half a century ago they were expected to be served throughout life, and to keep on living without purpose and direction.

As I gazed up towards the child goddess in the carved window I could not help but wonder: what can life be like when one has reached the ultimate and beyond already before adulthood?

Once upon a time there was a late night drive into Bhaktapur. Paying the UNESCO World Heritage Site entrance fee to a dodgy guard in an even more dodgy booth lit by fluorescent lights. A guest house, dinner outside and a room with no heating.

And an early morning in bed, curled under the covers in a freezing cold room, sounds of drops heavily falling on trees in the courtyard. The scent of rain in the air. Monks chanting behind the courtyard in the temple square, chiming little cymbals and bells. Absolute calm. 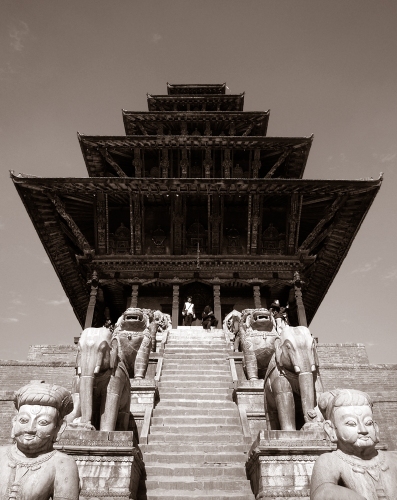 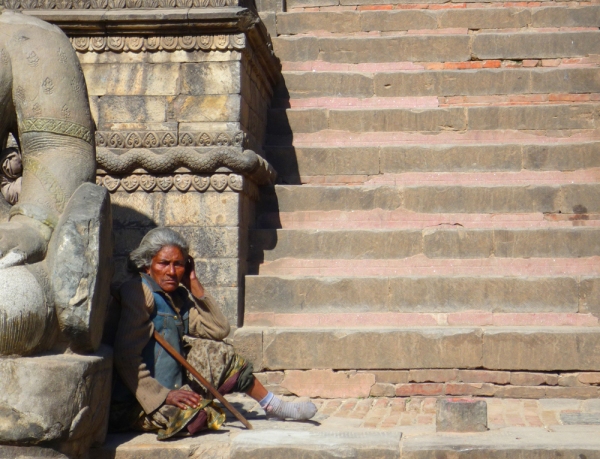 How many Hindu deities are there? 3? 3000? 330 million? A different number is thrown into the air every time somebody dares to pose the question. The stories of Iliad and the names and attributes of Greek deities are holiday reading compared to the embroidered tapestry that is Hinduism.

How much must Hindu children struggle in school in order to remember even a small fraction? Perhaps some child stayed up late to memorize the story of Narasimhadeva, the lion god who slayed the demon king?

Or that Vishnu the protector god travels on the back of an eagle? 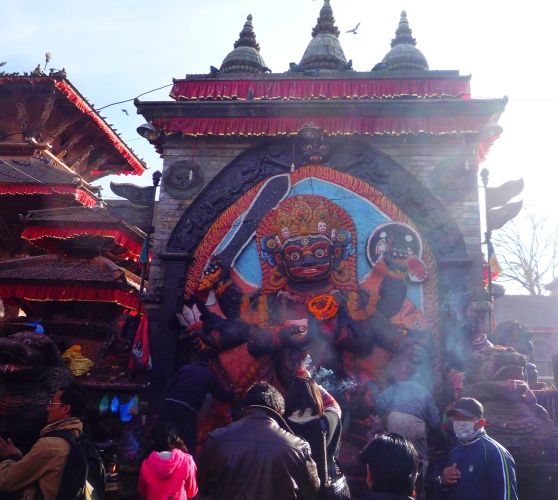 Or that goddess Kali is the manifestation of destruction, blackness, and power over time?

Kathmandu is crowded with temples. Each temple holds several deities, or forms of deities, each and one somehow interlinked back to the two main gods Shiva and Parvati. Dizzying: how can anyone choose who to worship and for what specific purpose?

Perhaps the number of gods is irrelevant: there may be as many faces of God as there are people. The ancient Hindus believed there were 330 million souls on this planet – and thus also 330 million deities: one for each one of us as we all are manifestations of God. Perhaps this is the truth? After all, the common greeting “namaste” translates as “I greet the divine within you”.

Perhaps it does not matter. Perhaps what matters is the thought that is carried with the tika dye and chime of bells. Perhaps all that matters is that the pigeons carry the prayers whispered to rice grains with them, up into the heavens.

Kathmandu valley is a pot brimming with dust, exhaust gas, and smoke. On sunny days a thick, warm-tinted, dry haze hangs over the city. Finnish, a master of subtlety, has a word for that sun-tinged haze: auer, also known as päivänsavu (day smoke).

While auer may be one of the most beautiful words in the Finnish language, on the second day in Kathmandu I was coughing and sneezing my airways inside out. How surprising to learn that made-in-Bangladesh generic allergy medicines can alleviate pollution irritation.

And how lovely to escape out into Nagarkot hills on the fifth day, if only for a night. And what a night. There was a sunset over the valley, a hilarious birthday dinner celebration, learning to play the Tibetan singing bowl, making a sarangi band play “happy birthday” twice because we missed it the first time, and later working on the computer in bed by candlelight in a room that never knew heating.

And there was a sunrise, to the East right off the Himalayas. No dust haze, just heavy dew hanging over the air before a clean, clear day began. 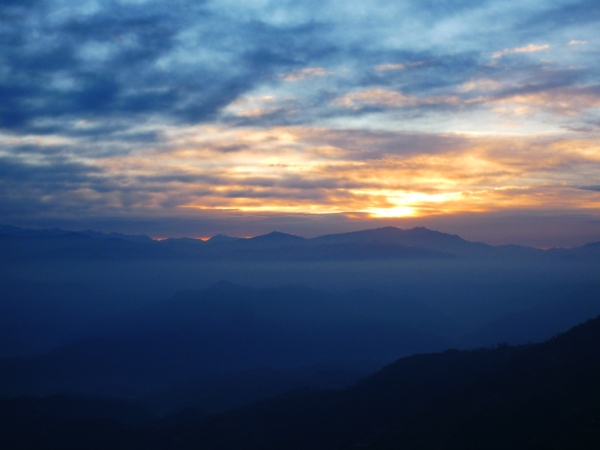 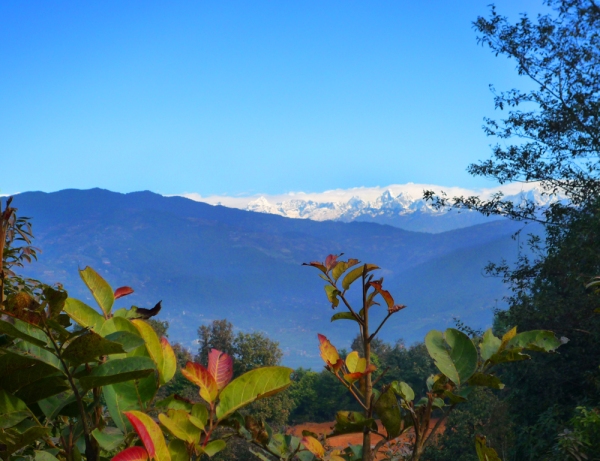 All the birds have flown up and gone;
A lonely cloud floats leisurely by.
We never tire of looking at each other –
Only the mountain and I.
(Li Po) 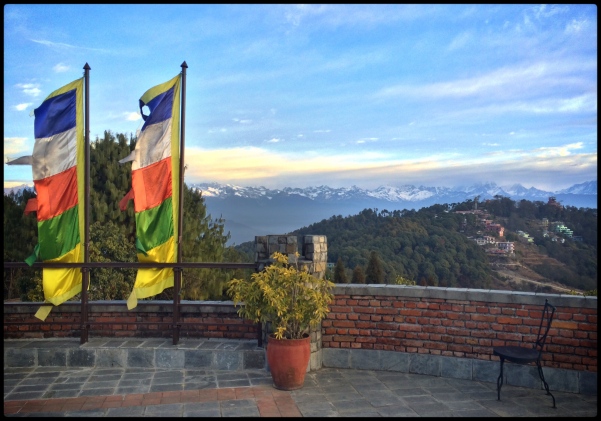 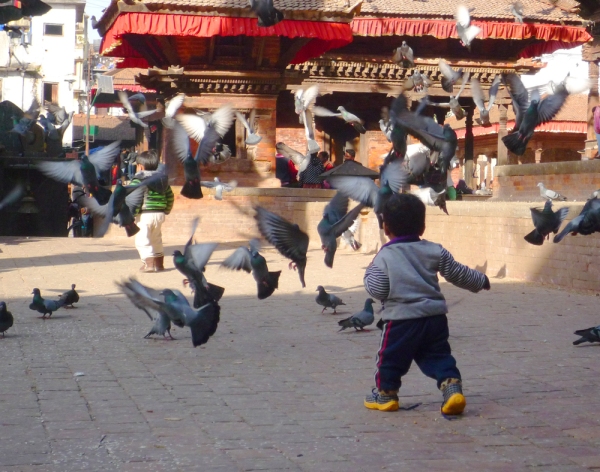 We are all same but different.

Once upon a time, lord Shiva wanted his wife Parvati to learn that the world was an illusion. Parvati found it difficult to understand that material things such as food could be completely disregarded. She became angry – and poof she disappeared. And suddenly there was no more food. People and animals and nature starved. Lord Shiva became nervous, then upset, then desperate. He begged for his wife to return. And she did – and immediately she began to make food for the world. She taught her husband that as long as we are on this plane of existence, and made of matter, we cannot completely disregard material things.

Parvati is also called Annapurna, goddess of nourishment. Up high in the Himalayas there is a mountain called Annapurna. Perhaps it is under this mountain’s watch that Kathmandu valley seems to be brimming with food? 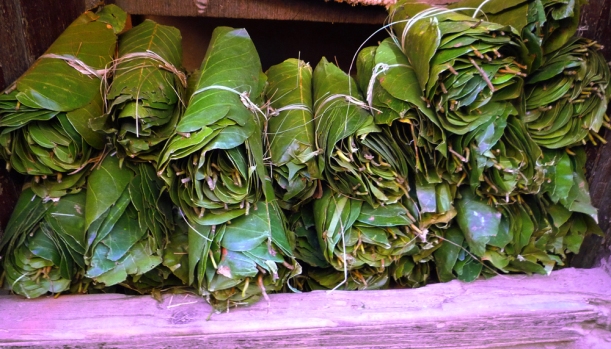