I have a love-hate relationship with diving underwater. On the one hand I love the sea and looking at the underwater world. On the other hand, my ear canals are small and I have problems flying with the smallest symptoms of cold, or freediving deeper than 3 meager meters. But together with an instructor from Buccaneer Diving, a divemaster friend, and a lot of technique rehearsing, in Paje I found a way to equalize my ears. My goodness. I also found a way to work with my sinuses pre-emptively so that my ears would also not crackle and pop the next day after the dive.

Hello fish, here I come. Even if I now go through the following routine every single minute: equalize by blowing against my nose, get water in mask so I can’t see, stop to clear water from mask by blowing bubbles. Hence, I need to become masterful in buoyancy control and level-diving to minimize pressure changes and the need to equalize. But hello fish, here I come!

It turned out that the beach hut in Paje was next door to a 5-star PADI dive center. And on Paje beach, every 200 meters there is either a kitesurfing school or dive center. Not going out and underneath the waves was obviously out of the question. And what an amazing reef, outside of the lagoon. 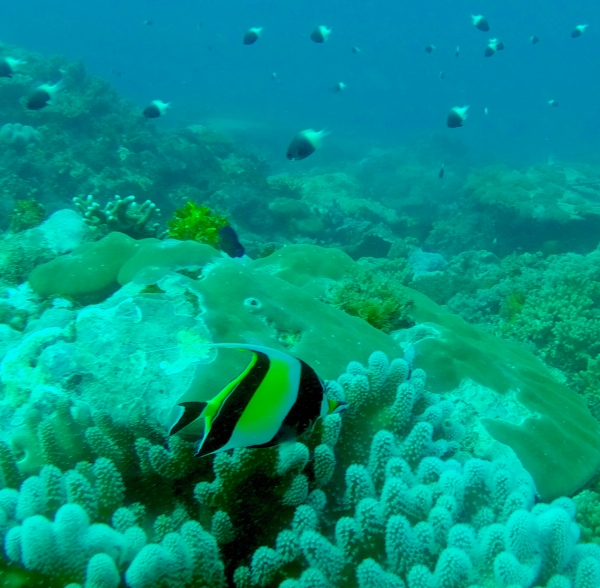 Paje is a windsurfing hotspot because of the wind, of course. This means that getting into the dive boat (and changing air cylinders) was – well, choppy, to say the least. On some days, positively “swell”.

Underneath the surface, Zanzibar is a maze of coral rock caves. We stood on the beach near the Fukuchani ruins and felt the hollow ground shake beneath our feet: the waves crashed into subsurface holes in the coral rock. Oh the joy of baby fish, to play hide-and-seek in such a labyrinth!

Further down the road from Kidoti toward Mkwajuni there is a hidden coral rock cave, a short forest hike away. It is just one of the numerous known caves – and it is said to have a passage all the way to the sea. That must be true, as fish were swimming in the dark waters. And the water was crystal clear: everything grayish green on the photo above is underwater.

The cave was nearly impossible to find without the help of a local who knew, a badly placed sign, and some kids by the side of the road. They urged us to leave our expensive rental bikes and hike up. Because this is a locally maintained cave, not one of those famous slave caves that receive busloads of visitors every day. Here you can enjoy the silence and swim a few laps in the freezing cold, clear water without being photographed. Just like other cave explorers before have done, for hundreds of years.

No regrets for a very expensive dinner at the Hilton DoubleTree, so I could use their fast wifi for photo and video transfer. It cost me 79,000 TSH, which is about four times the price of a low-end tourist dinner, and about sixteen times a village dinner. In euros it is only about 30€, though. Cost is more culturally bound in Africa than anywhere else I have been, including Southeast Asia.

The tide crept in during the night and splashed my laptop. I paid 30€ for getting seawater on my laptop.

Sunbathers, cows, kids playing soccer, maasai touting safaris, others touting coconuts, and ladies fishing in colorful robes. This is the Africa I know, and expected but never encountered in Namibia. On the flipside, it is an odd shift to go in an instant from well-watered lawns and white-washed houses to bare concrete, trash on the ground, chickens running everywhere, and no imminent beauty in design. The people here live well it seems, but they just do not appreciate the same things we do. 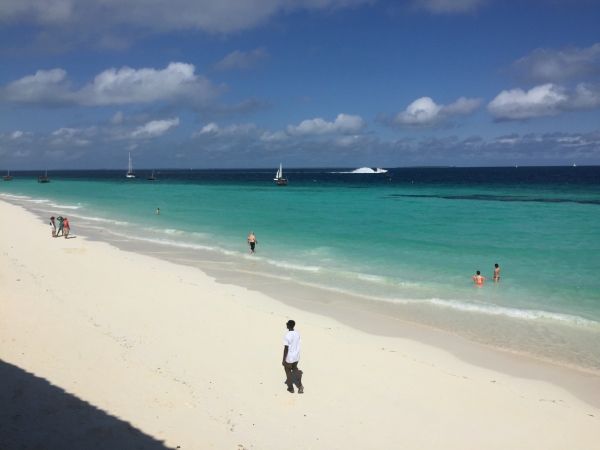 During the day, kids crowd the beach: boys, big and small, play soccer in the sand; while girls, already draped in hijabs, walk on the beach giggling. It seems that the fashion here is very tight jeans or leggings and a looser, flowing top plus a beautifully colored headscarf.

When I buy fruit or transport with my local friend, people easily want to charge us more than what we know is reasonable. It upsets him. He says they think I am paying for everything. Moving around without my friend I notice the hawking beachcombers much more. The trinket peddlers. The Maasai who corner girls on the beach, selling snorkeling trips and safaris, and, according to my friend, also other services. It is a constant “Jambo, how are you?”. I wish I could be courteous and chat with everyone, but it is too much. Fortunately this is Africa and everybody has a sense of courtesy and limits for intrusion. The only time I have become properly upset is when a man tried to charge me ten thousand shillings for a coconut, when I knew I could buy one for two thousand elsewhere on the island.

My local friend does not fit in well, either. Some of his clothes are too trendy. He has a new cell phone and a GoPro, and European shoes, rucksack, and nice sunglasses. His time in Europe has changed his perspective, and he is only realizing it now. “Culture” is a dance where the rules are “code and expectations”. We are all expected to know the steps of this dance. But being a global citizen is dancing freestyle. And learning to dance freestyle means not really fitting in anywhere except for with other equally rootless people.

And so today I will do what a tourist is supposed to do: buy a coconut on the beach. But I will not pay more than three thousand shillings for it.

Our boat was freshly made, out of mangowood. The finishing touch was given by a fire just the night before. Burning the surface with a hay fire made it more seaworthy. I was glad it floated.

Zanzibari fishing boats are very narrow and deep, like deep kayaks with wooden side floaters and a sail. My bum was not much smaller than the width of the boat, but for the quite petite locals I am sure the size works much better. The sail is rigged with two ropes so it can be used by one single person – which is the case most of the time anyway. The floaters make the boat very stable, so a solo sailer can focus on working instead on staying afloat.

The fishermen often go out at night. There are very few lights by the shore, and some decades ago there was no electricity at all. The fishermen still know how to navigate using the stars and the wind, avoiding sand banks and coral rock in the dark.

Our fisherman guide said he would not normally take his own daughters or wife out in the boat. It is not done. Women are considered to be too weak to manage the seas. He laughed when I said I pretty much grew up spending my summers on boats, home-made rafts, and other floaters. Local women do fish, but from the shore, wading in the water. Honoring the women, a boat may be named by other villagers after a man’s daughter. This boat was only proving to be seaworthy on this very voyage, so it had not yet earned a name.

Only one experienced boatmaker and sailor would take two tourists onboard for a maiden voyage. I was glad we stayed dry. 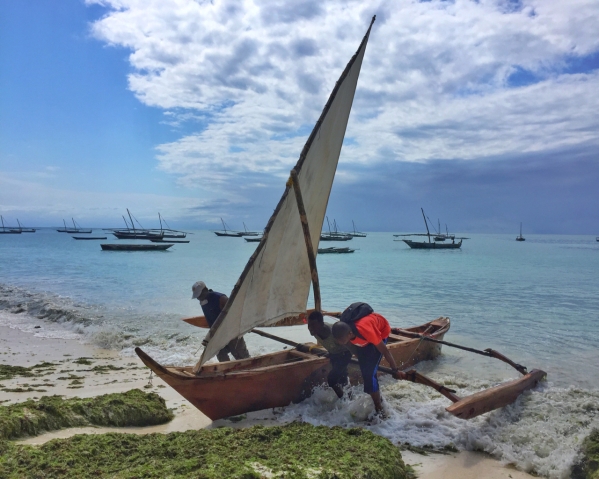 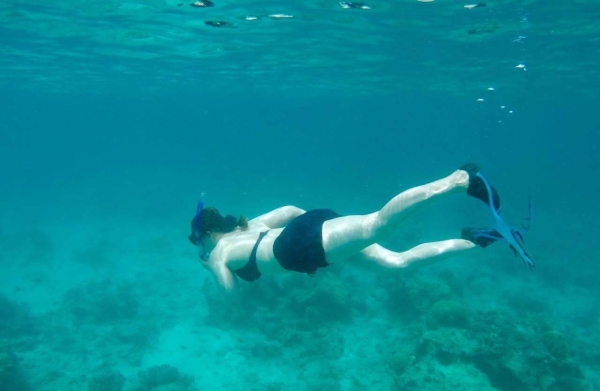 The reef around Pemba island is in bad shape. I thought it was because of us tourists, but apparently the water has been unseasonably warm for too long. The fish were plentiful though – and so were the jellyfish! I felt many baby jellyfish sting me, and kept looking around for the grown ones but never saw any. Later I met a girl who had been stung so badly her entire skin was prickled red like a fit of hives. Holiday experiences can be rough.

Fortunately, on my outing I could focus on tailing a beautiful dark purple pufferfish with pearly white dots. As it was so beautiful we forgot to photograph it. But here is another pufferfish, almost equally pretty. 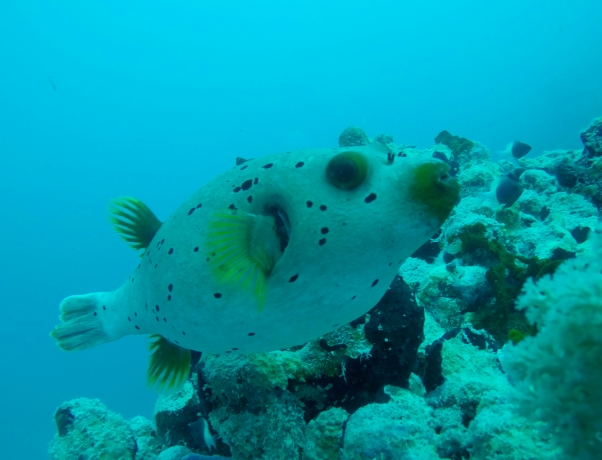 In Nungwi the location displayed in the iPhone weather app is “Indian Ocean”. How suitable. We really are on a bank of coral rock and beach sand the middle of the Indian Ocean. And it never gets cold at night.

At the tip of Nungwi village, by the lighthouse, there is a turtle sanctuary. And for nearly a week they offered sanctuary to me, too, in one of their vacant guest rooms.

The turtles are brought in either as hatchlings from the beach or adults, stuck in fishers’ nets and in need of care. The sanctuary originated in the minds of the villagers and is entirely community-driven, not European or American. Young volunteers do contribute to the upkeep of the sanctuary, as do all the tourists that come to feed endless amounts of seaweed to the greedy turtles floating around in their huge seawater pond.

I could count roughly a dozen babies and some 20 adults or young adults in the basins. While the effort is good, one can ask whether so much contact with people is a good thing. Feeding turtles is a main attraction and source of money, but what happens when the turtles are set free in February each new year? Will they approach swimmers or fishermen and put themselves in danger, thinking there is seaweed to be gained from contact with people? And if this risk was not taken, would people ever really learn to appreciate the friendly, vulnerable turtles as a species?

Absolute goodness probably does not exist. Perhaps the benefit gained already by the villagers’ increased appreciation for turtles has saved so many turtle lives that it does not matter if some of them think people equals seaweed fiesta. I for sure could not resist watching them munch away every time I visited.

On Zanzibar the tourists occupy the prime beach front and the locals the remainder of the island. Right after the beach-lining hotels and restaurants, real Zanzibar begins. It is sad that the locals have mainly lost access to beach-front living. But in Nungwi, the village is so much more present. It spills onto the beach at the northernmost tip of Zanzibar: kids playing soccer, women fishing in tidal pools, and fishermen repairing their boats and nets. The water is turquoise and shallow for several hundred meters, until the reef that catches the breakers. Here everything happens on the beach, also after sunset if the tide is low.

The contrast between tourist areas on the beach and the villages is huge. The people in a village, like anywhere in East Africa, have proper concrete houses, but no need for furniture or lamps or gardens or any decoration for that matter. Torches and lights are hung up for the night, and people sit on simple mats on the floor. Everything is functional and nothing is further developed. Food is served on the floor in whatever dishes the house has. There might be a toilet, or there might (most likely) be an outhouse with a hole in the ground.

Perhaps our perception of what is necessary differs from those living in a village on Zanzibar. Why buy a side table and a lamp when you can hang a torch from the wall and grab it with you as you go?