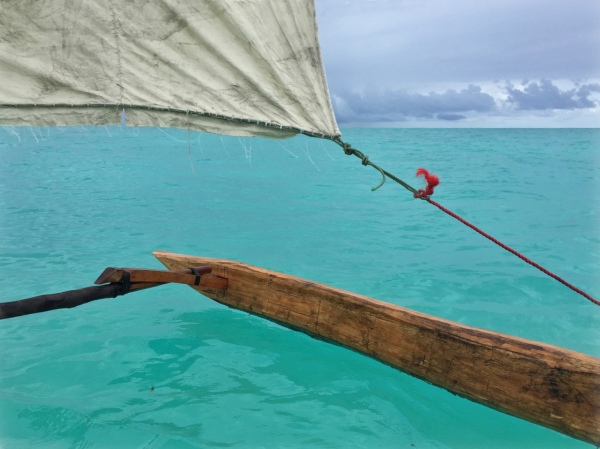 Our boat was freshly made, out of mangowood. The finishing touch was given by a fire just the night before. Burning the surface with a hay fire made it more seaworthy. I was glad it floated.

Zanzibari fishing boats are very narrow and deep, like deep kayaks with wooden side floaters and a sail. My bum was not much smaller than the width of the boat, but for the quite petite locals I am sure the size works much better. The sail is rigged with two ropes so it can be used by one single person – which is the case most of the time anyway. The floaters make the boat very stable, so a solo sailer can focus on working instead on staying afloat.

The fishermen often go out at night. There are very few lights by the shore, and some decades ago there was no electricity at all. The fishermen still know how to navigate using the stars and the wind, avoiding sand banks and coral rock in the dark.

Our fisherman guide said he would not normally take his own daughters or wife out in the boat. It is not done. Women are considered to be too weak to manage the seas. He laughed when I said I pretty much grew up spending my summers on boats, home-made rafts, and other floaters. Local women do fish, but from the shore, wading in the water. Honoring the women, a boat may be named by other villagers after a man’s daughter. This boat was only proving to be seaworthy on this very voyage, so it had not yet earned a name.

Only one experienced boatmaker and sailor would take two tourists onboard for a maiden voyage. I was glad we stayed dry.