No need for a gym pass for those who live in Villefranche-sur-Mer. Their gym has either a sea view or a view of sunlight old houses nestled close to each other. Those who work at the city hall have the pleasure of a light cardio exercise as they walk through the citadel and enter the sunny courtyards on top of the hill.

Villefranche-sur-Mer’s little alleyways have always been so narrow. The town just grew organically around the little fishing harbor. Rumor is Jean Cocteau used the back streets for a haunting scene in a film. What is known for sure is that he loved the place so much he painted the insides of the fishermen’s chapel in a lovely Picassoesque style.

Many other movies have been partially filmed here: a James Bond, a Hitchcock movie, and others. Somerset Maugham had an apartment here as he much preferred the quiet waterfront to the busy Nice boardwalk.

I can quite understand why. If I were to concentrate on writing a book, this is the atmosphere I’d prefer, too. 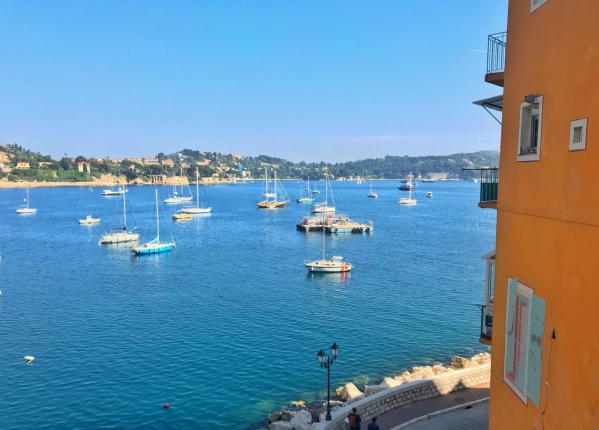 Work? Who needs it on a Thursday when one can have tea on the French Riviera?

Lovely ones, apologies for the radio silence. Wow, nearly three months have gone by: an entire summer. And what a summer. One where it has been an everyday challenge to climb high enough to see the bird’s eye view. Instead I have spent most of the time either buried in the trenches or with my head spinning. It is an act of mindfulness to gently pull on that string that we all have attached on top of our heads. You know the one that, if we just keep pulling, lifts us up higher and higher, so that when we are alongside the clouds we actually see the big picture of our lives.

I am writing this from Singapore, where I arrived just a few hours ago. It is late and I have slept about 9 hours in total during the past two nights. The apartment in Helsinki is now emptied, boxed up, and wrapped in plastic. Tomorrow hell breaks loose and the replumbing team begins to tear up the bathroom and the pipes in the entire building. And I grabbed my backpack and shut the door behind me. For a long while. Quite probably for good.

There are so many cliché ways one could describe starting a new chapter. I will not attempt any of them. Instead I will focus on sleep – and starting tomorrow, on noodle soup. I am hoping that this combination will slowly pull me up so I can see the big picture again.