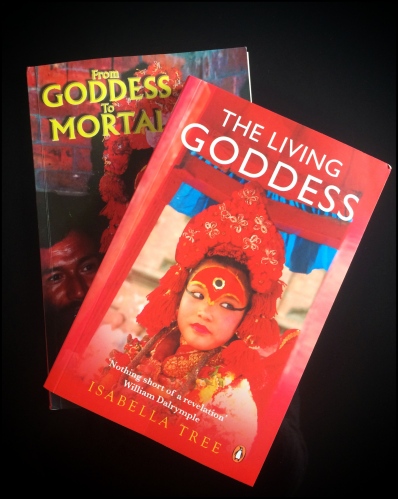 What if your little daughter or sister was proclaimed to be a manifestation of a goddess at the age of five? What if she was carried away to a temple and locked up except for ceremonial processions? What if she was never allowed to smile in public and her feet were never to touch the ground outside? What if priests worshiped her every day and tourists gaped in awe or reverence when she appeared at the window?

And what if she, by showing the first signs of puberty, was to suddenly become a mere mortal again? If she had to go through a crash course of finding an identity other than deity, learning how to read and write, and how nobody can be commanded outside of the temple?

To be a Kumari is to be whisked beyond reality, just to crash into mortality a decade later. Today Kumaris are expected to find a place in society – yet only half a century ago they were expected to be served throughout life, and to keep on living without purpose and direction.

As I gazed up towards the child goddess in the carved window I could not help but wonder: what can life be like when one has reached the ultimate and beyond already before adulthood?