King’s Cross-St Pancras was only a train station to me. A place that took me to Cambridge, a place of transition. Nobody told me that behind the huge buildings was a whole hipster world, with an art school, happenings, interesting buildings, and a Dishoom. Dish-yum.

Sipping our old-style cocktails with a twist in the bar I could not help but admire the marketeer who had come up with the idea of imitating an old, colonial-Indian-Persian blended Bombay Café. Perhaps time has passed long enough so that the strong English colonial vibe is not considered offensive. It is only when there is enough space between us and a milieu, preferably a whole generation, that something oppressive or negative becomes swanky and cool.

Some like Dishoom. Other frown and prefer their local curry house. I don’t care much for curry and I absolutely loved Dish-yum, right down to the salty lassi. Even after the 40-minute wait outside and another 20 minutes in the bar.

Kings Cross, I will actually spend some time outside of your train terminal some time soon. If not for else than taking in your cool vibe and more of this food. 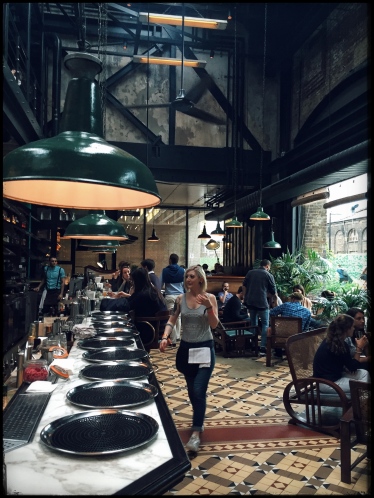