Why is it that perfect control over animals is viewed as a beautiful thing in our human culture? Why is it that a perfectly behaving horse or dog is seen as a perfect companion; whereas a cat that levels with a person and establishes a deep friendship, where it still usually does as it pleases, is seen as uncomfortable or even unappreciated? The Spanish Riding School claims to only enhance the natural behavior of the Lipizzaner horses, but why must they be perfectly controlled by straight-backed men (and a few women) for us to love them? As I sat watching the Morgenarbeid (Morning Work) of the horses in the Spanish Riding School, I could not help but think of the incessant need for dominion over animals and anything else that is one of the deepest drives of us humans.

During the centuries, the horses have been involved in much human power play. Lipizzaner horses in the Spanish riding school in Vienna have an Italian name originating from a breeding place in Slovenia. European history in a nutshell. They were specially rescued during the World Wars and have been close to the hearts of the Austro-Hungarian emperors. Today they are close to the hearts of so many little girls and boys worldwide.

All Lipizzaners are born dark brown, nearly black. Most mature into a grayish white, but sometimes the brown color prevails. A dark stallion is a good-luck horse, a talisman that is said to protect the school, as trouble has ensued several times when the school has been occupied by white horses only. And the current dark resident was beautiful. Alas, no photos allowed of the horses, and this was strictly enforced. 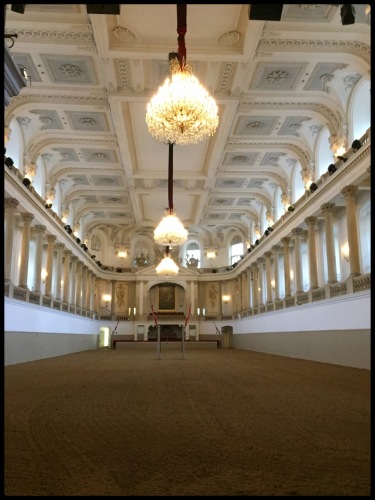