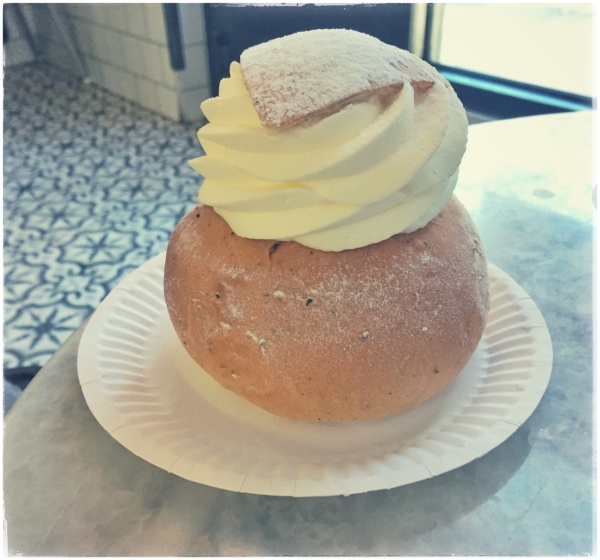 The laskiaispulla (FIN), or fastlagsbulle (Swedish dialect in FIN), fastelavnsbolle (NO) or semla (SE) is one hell of a calorie bomb: sweetbread carved out to harbor a clump of juicy, bitter-almond tasting marzipan (or raspberry jam for the heretics), with a cloud of whipped cream on top. But what else do you want on a cold February Shrove Tuesday when the body craves for energy?

This is as close as we get to Carnival in the Nordics: one or several laskiaispulla before 40 days of “fasting” (over here it was mainly cutting out the superfluous) before Easter. Except I don’t know of anyone who actually fasts. It seems to be a nearly dead tradition – and why? In the middle of the carbohydrate frenzy our body seems to prefer during the cold months, take 40 days and really consider every piece of simple, unextravagant food you put in your mouth. Cut down on sugar, leave out the booze. And kick-start it all with a few laskiaispullas in the ancient fashion: served in a bowl of hot milk. This dish is called “hetvägg” in Sweden (hot wall). Try it and you’ll find out why.