Deep in what was once called “Little Arabia” and now renamed “Kampong Glam”, sits a lane that once was poor, then totally dead, and now a hipster mecca with artsy boutiques and little independent cafés and bars. The two-storey, colonial style buildings are decorated with street art and at night, music is booming. Here you can grab a cocktail, while a street down into the heart of “Little Arabia” you cannot find any alcohol (or non-halal food) at all.

This is Singapore: layers upon layers of culture, morphing into something new by quick swings of time. What once was dead is now the heart of cool. And in the midst of it all stand old buildings that have seen so many trends pass by. Not sure what they think of their current coat of paint.

Singapore is ever-evolving, but it is also very orderly and safe. What else could it be if one is fined 300 SGD (170€) for eating a durian fruit at the hotel, 500 SGD (300€) for eating or drinking on the subway, and 2,000 SGD (1,200€) for smoking in the wrong place? Perhaps this is not the most constructive way to encourage good behavior, and it certainly is not the way to function in a positive space, but it works. This, combined with a pleasant and polite demeanor makes the busy society work at least in the superficial view of the visitor.

One cannot help but wonder if such is the only way? If threatening by proper punishment is the only way to “encourage” large masses to adhere to rules that make living pleasant for all? While waiting for a train at the MRT station I watched a video reminding me that molestation is a serious offence. Victims were encouraged to shout out for help, indicating they had been touched and by whom, and passers-by were encouraged to interfere. Molestation in Singapore is an Outrage of Modesty, punishable by prison AND caning. Yes, caning. In the 21st century.

But as long as I do not eat durian or smoke, and nobody accuses me of molestation, I should be just fine with a glass of wine here on Haji Lane. And perhaps some Middle Eastern cuisine for dinner, while darkness descends on the golden domes of the Masjid Sultan mosque. 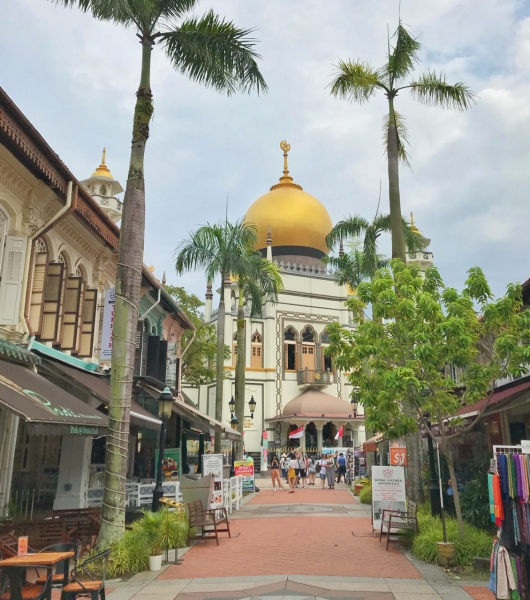