More pintxos. Of course. This is San Sebastián. I lust for fresh vegetables but all I find is pickled olives, pimientos de padrón, or grilled red peppers on bread (which I do love but in moderation!). At home I steam tenderstem broccoli or flat green beans every day. Word is spreading among my classmates about a restaurant that specializes in fresh vegetarian fare. Sounds like heaven to me right now.

The original pintxos were apparently simple fishermen’s food. They seem simple, but keeping a menu of 20-30 pintxos and bocadillos requires a lot of salting, pickling, blending, and deep-frying. A potato tortilla is a pintxo (or bocadillo), and the “original” pintxo with green olives, green pickled peppers, and a small slice of pickled anchovy requires quite a lot of preparation if everything needs to be home-made.

Basque bars are not places for relaxing, thinking, and writing. The music is loud and energetic, and if there is no music the other people are loud and energetic – and there are no seats. Eating at a pintxo bar is not for the timid, and some command of the Spanish language does make it much easier. The best is to just elbow in, look at what is going on and what is on the menu (and everybody’s plates) and then do like everyone else. And if there is no need to elbow one’s way in one is probably better off by going somewhere else. Some pintxo bars are order only. Others require the guest to take a plate, fill it at the bar, and pay at the end of the counter. Some bars have table service for the lucky ones who manage to grab a table. Finally, in the most traditional bars one elbows one’s way to the counter, orders just 1-2 pintxos and a small glass of cider, and flees into the street to eat after paying in cash at the bar.

Each bar may serve 20 different kinds of pintxos, but there is always one signature pintxo that the locals know to choose. Some are proper dishes (I’ve even heard of a risotto “pintxo”). Thus on a Wednesday pintxopote night (or a weekend night) people pintxo bar crawl, having one or two bites and a small drink at each place before moving on. Ordering 10 pintxos in one place in one go is what tourists do.

With pintxos most locals choose to drink Basque cider, or txakolí, a local cider-like wine. Both are very dry and contain little or no bubbles. Therefore they are poured from a special cork which is added to the mouth of the bottle. The glass is placed several dozen centimeters below, preferably at arm’s length, and the drink is poured in one long stream (like something else yellow…). The idea is to freshen up the flavor by aerating the drink before serving. Both txakolí and cidra taste surprisingly strong and yeasty and even bitter. The cider is strong and alcoholic while the wine is not, and both are served in the same large tumblers which are only poured one-third full or less – some 100 cl at a time. Just enough for a pintxo. 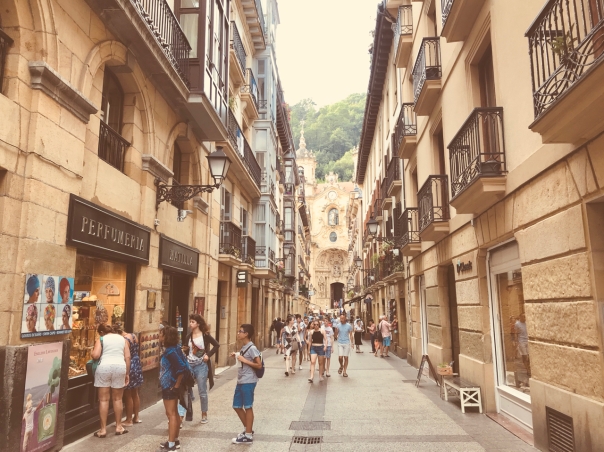