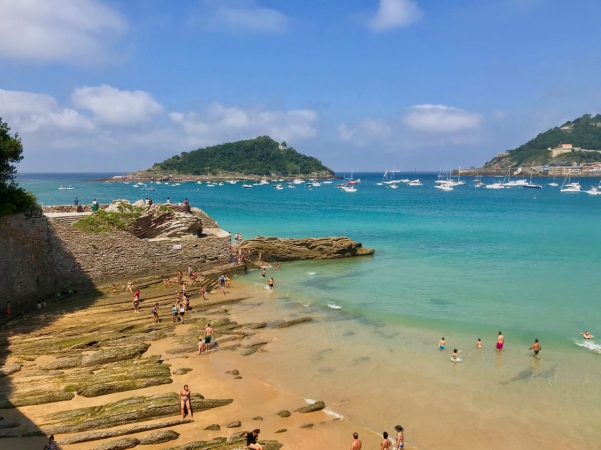 Me duele la rodilla. My knee hurts. Quite a lot, actually. I could hardly get up into my high princess bed last night. The Dominican el profesor de Zumba (i.e. a young, curly-haired, unprofessorial instructor) took us all through a whirlwind hour-long zumba class in a fiesta del barrio (or neighborhood party) last night in a nearby town.

Among tall apartment buildings there was a square filled with tents and stools and tables and a barbecue and a bar – and the zumba stage. Naturally, the dancing did not end with the end of the zumba class. It was quite a while since I last danced this much latino dances, and I learned that while dancing is doable, my broken and surgery-repaired knee does not like zumba at all.

Thankfully, there were freshly grilled sardines and Basque cider, as well. And most wonderfully, even the kids were not forgotten – or put into bed. They had their own program until 11 pm: a limbo competition, dance class, and dancing on stage with the DJ. Even three-year-olds were fabulously feeling the beat. This is how you raise kids to become adults who like fiestas and know how to move. Not the Finnish way where kids are told to stay away from the dance floor instead of being guided to show how to behave on one. Although I did hear a rumor that Basque men do not dance. Hopefully this is soon in the past (preterite or imperfect?) tense!

I sit and write in my room, before leaving San Sebastián. The clock struck twelve, the air alarm test just ran, and my lovely landlady is trying to locate my laundered yoga bra which is perdido. From my window I can see the Christo statue on Urgull, still standing in the same position of blessing: slightly bent, with one hand held high. I am sure there are people in the little bar below.

Life goes on in San Sebastián. Instead of busy fishing and foreign trade brought in by ships there are foreigners eating fish and brought out to sea for a day’s outing. Hordes of kids are swimming on one half of the beaches, while the other ones is always claimed by boarders surfing. And just like hundreds of years ago, people still fish with hooks and lines off the rocks at the boardwalk behind Urgull. And I need to leave in just two hours.