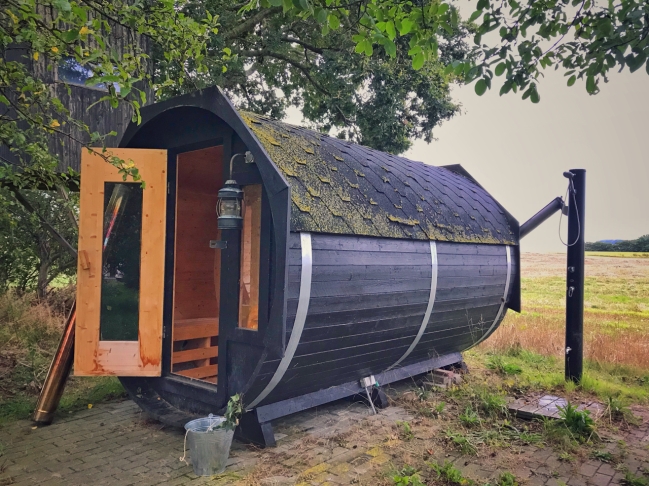 One late September night seven women squeezed into the oddest little sauna I have ever seen. There was sweat, steam, the fresh scent of birch twigs, and laughter. And there was nearly no light as candles would melt in the heat of the stove. Also, oddly, there was no water except for what was carried in in a bucket. Anyone wishing to wash themselves needed to do so outside, under the garden shower, in the moonlight (or in the main house bathroom).

I have understood these “sauna barrels” are all the rage in Denmark. And quite far removed from the Finnish purpose of sauna: a warm place to wash and scrub oneself as clean as possible. Furthermore, the Danes are currently much into “saunagus”: a scheduled program run by a sauna master in a public sauna or during a private event. This usually entails aromatherapy oils, steam, ice buckets, and potentially a relaxation or meditation exercise while people sit or lie down on the benches in the heat. Oddly for a Finn, the sauna master can also turn out to be a magician dressed in black-tie (how sweaty!) or a stand-up comedian. And if nothing else, he or she is expected to at least be able to spin towels in the air in a fancy way. All this is also quite far removed from the Finnish spartan sauna tradition, where not many words are spoken and certainly no tricks are performed as the sauna is a serious place for quiet and contemplation.

That late September night, seven women crammed into the sauna barrel. It was so dark we could not read the labels of the aromatherapy oils, so each scoopful of scented water turning into steam on the hot rocks was a surprise: mint, ylang-ylang, lemongrass, or something else? And there was much chatter and laughter, more than I am used to. Such joy took much space during that weekend, among new-found friends.

One thought on “Sauna squeeze”