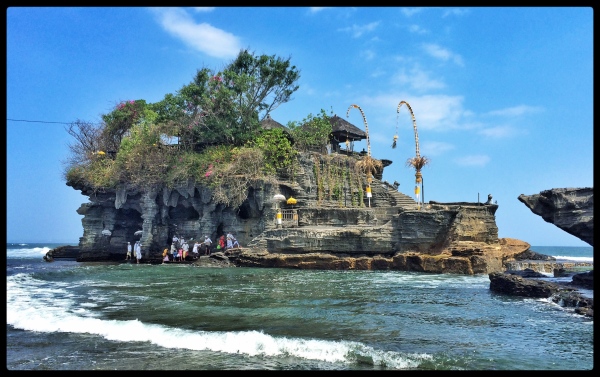 At Seminyak beach I jumped into a Bluebird cab. “Take me to Tanah Lot temple, please.” “It is quite far and we would need to agree on a price” said the driver. The sole reason for why I chose to endure the crazy-drunk-Aussie-vibe of Seminyak for one night was to see Tanah Lot temple. We agreed on a price and began the squiggly journey out North through the Aussie beach settlements.

Nearing the location I casually asked my drive how to get catch a cab back to Seminyak. “What do you mean catch a cab? There are no cabs at Tanah Lot” he replied, puzzled. No way to get back unless you had a hired car or were on a tour bus. It was too far to hail a scooter back into town. I had driven all the way out to see Tanah Lot but in worst case I would be stuck there for the night.

Fortunately, after settling the meter fare and offering a nice extra he agreed to stay and wait for me for an hour. I made him promise, swear on his mother, that he would not leave me stranded.

Slightly worried I slipped through the gates, through the touristy stalls, and hurried down to the beach – along with a few hundred other tourists. And there it was: a temple that was built on a rock, withstanding the crashing surf and only accessible during low tide. The most photographed site of Bali, and one of the holiest temples in Indonesia. Time stood still. Tanah Lot took my breath away for a full hour and a half, until I realized I should probably try my luck to see if the driver was still around.

He was. That wonderful, incorruptible man. He had been pestered by four separate tourist groups, offering him huge tips and double fare and whatnot to take them home. It could have been me in the late afternoon, desperately trying to get a ride back into town. But I had a ride. The Balinese once again proved to be more reliable than many other cultures (Finns excluded).

We rode ahead of the sunset back to Seminyak. I had a camera full of photos, and an image burnt forever onto my retina: of Tanah Lot temple surrounded by a constant crashing surf but unyielding, like a courageous heart. 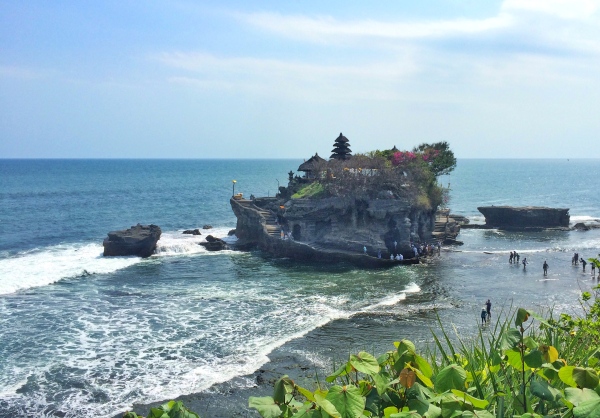 6 thoughts on “A pilgrimage and a lucky return”