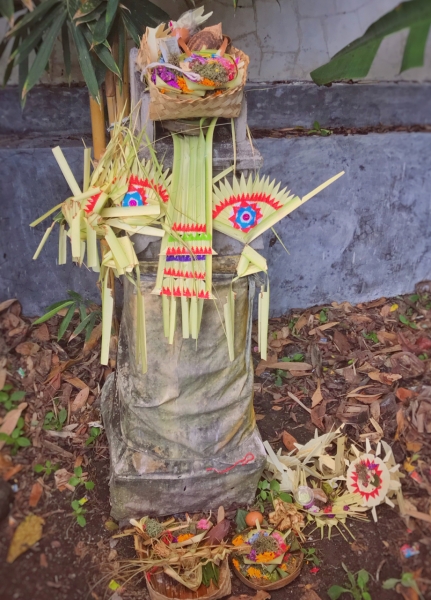 Tens of thousands of baby chickens died last night. Each Balinese house sacrificed one along with a bigger evening offering placed outside of the gate, by the road. Some houses had deemed pierced eggs to be enough, but most houses slaughtered a baby chicken. A holy man dressed in a white gown and turban squatted by the offerings at each house, making hand gestures and plucking fluff from the scared, cheeping chick and spreading it over the offering. Then he splashed holy water around. I did not see how the chickens met their fates but as I walked to yoga class this morning I had to dodge a tiny, dead, decapitated chicken by nearly every house.

I understood the ceremony was to pacify the gods after the earthquake. Unfortunately the lives of the poor innocent chicks were not sufficient, as we experienced another substantial quake today: M6.2 or 5.9 depending on who measured it, and Lombok was again the epicenter. The gods are obviously not content. My heart hurts for the scared baby chickens – as it also hurts for the 300+ people who were lost in the quake and the tens of thousands left homeless.

Balinese Hinduism is strongly influenced by animism and animal sacrifices are common. It is even in the name of this island: the word “bali” actually means animal sacrifice. Indonesia is a Muslim country and Muslim law does not allow animal sacrifices (or gambling for that matter) but here on Bali it is allowed as a way to keep people satisfied.  All sacrifices are linked to highly ritualistic practices, including one cockfight per year per temple (this is oftentimes not the case as cockfights and betting are a blooming practice for example in Ubud). Most of the times, smaller animals such as dogs and chickens are sacrificed, but sometimes the gravity of the situation calls for goats and even buffalo. The Balinese believe that animals sacrificed in the name of gods will be rewarded and reborn into a higher order of being as their way of departure from this life was sacred.

Once one has got to know the peaceful nature of the Balinese today, it is difficult to imagine that their ancestors were fierce tribal warriors, a little like the maoris of New Zealand. Sometimes even human blood was shed. Not always an enemy’s, either, as a successful cremation ceremony for the dead of the village would include nothing less than the sacrifice of a few women. Thankfully cremation was (and is) arranged only once every few years, and collectively for all deceased ones.

When it comes to life and death, Bali strips one to the core of the matter.