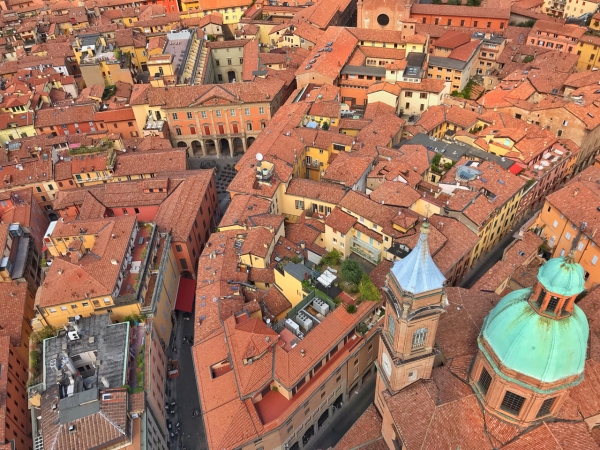 Bologna was once a Roman city. It is easy to see this from above: all streets lead to the central square (and one presumably to Rome). But Bologna is older than Rome: it was originally the home town of many Etruscans. 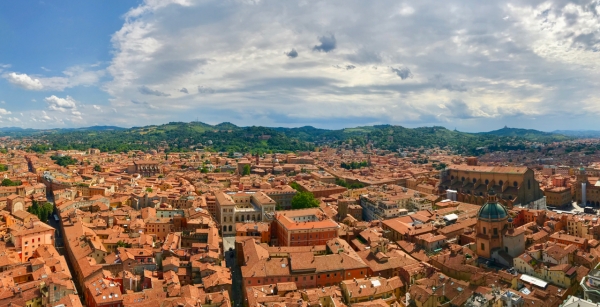 Each city has a local flavor of oddity. Bologna’s flavor is a penchant for building towers. Up to 100 towers in the late medieval ages, historians have concluded. Why? Who knows, but certainly one ruler would not have budgeted for all those towers so there must have been quite a few builders. Perhaps it was fashionable to have a tower in one’s backyard, ensuring that the family was viewed as having sufficient importance?

Today there are about a dozen smaller towers left and only two distinct, tall ones, aptly named the Due Torri or Two Towers. Yes, like the Tolkien book. I discovered that it is possible to stand near them and still not find them, thanks to the maze of Bolognese streets and Google Maps having the wrong coordinates for the location.

It is also possible to wear one’s lungs and muscles out before reaching the top. We passed quite a few tourists having a huffy and puffy pitstop on the winding wooden staircase inside the Asinelli tower. After all, an ascent of 97 meters and nearly 300 stairs is a decent workout.