Genoa is not an ordinary city. The old town has a certain coherence, but it is cut off the port by an expressway and viaducts. The port in itself has been revamped to look modern to the extent of futuristic. But it is all part of the charm.

Genoa claims to be the birthplace of Christopher Columbus – although how much of his life he actually spent here is not well known. Green pesto Genovese was of course also born here. It is delicious and sampled everywhere – as long as you adhere to the strict meal hours of the restaurants; lunch 12 noon to 2 pm and dinner 7.30 pm onwards. Oh woe if you are hungry anywhere between 2 pm and 7.30 pm: your only choice is to order a drink (with alcohol of course, even if your stomach growls), in order to obtain the sizeable platter of antipasto that comes along (for free!).

And some less ordinary things just make sense here. For example, why not build a cathedral in black-and-white striped marble? It looks absolutely classy. And I am sure it was a shocker when it was unveiled.

Take  day – or preferably at least four or five. Explore the Centro Storico, the museums, the aquarium, the hills accessible by cable cars, and the grand palazzos. 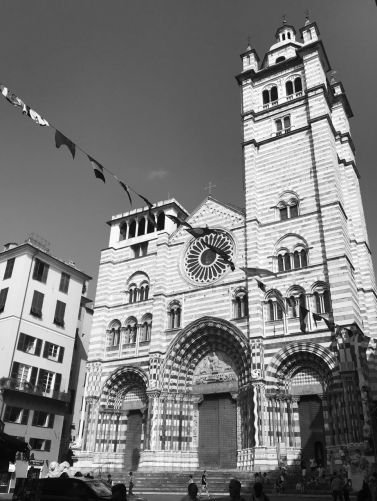 2 thoughts on “In Genoa”